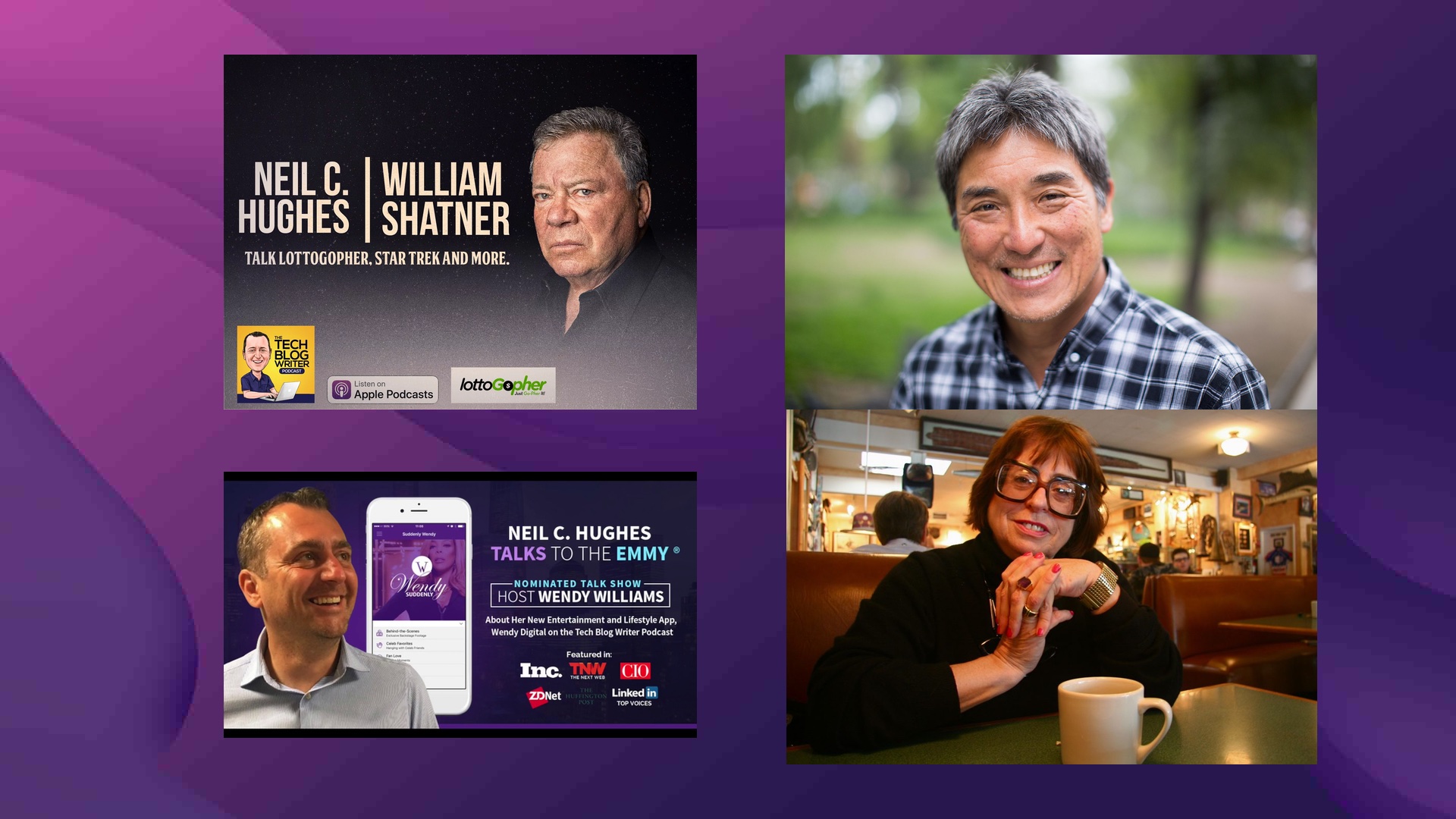 Leaders Sharing Their Tech Stories With The Tech Blog Writer

On my daily tech podcast, I interview tech leaders, entrepreneurs, CEOs, thought leaders and even the occasional celebrity about how technology is transforming their business and industry. Here are a few handpicked interviews from my 900 podcasts interviews that feature invaluable advice from people who have achieved incredible success.

In October 2019, I attended the WCIT event in Armenia with Kim Kardashian, Alexis Ohanian, Serj Tankian from System of a Down, and Gary Vaynerchuk. Once again, I found myself in a room with Gary Vee with a chance to hear his thoughts on the latest digital and tech trends. Gary shared why businesses need to pay attention to the explosive growth in audio content and why he believes that Joe Rogan is going to eventually sign a $100 million-plus deal to go exclusive on a platform because of the level of attention he has.” 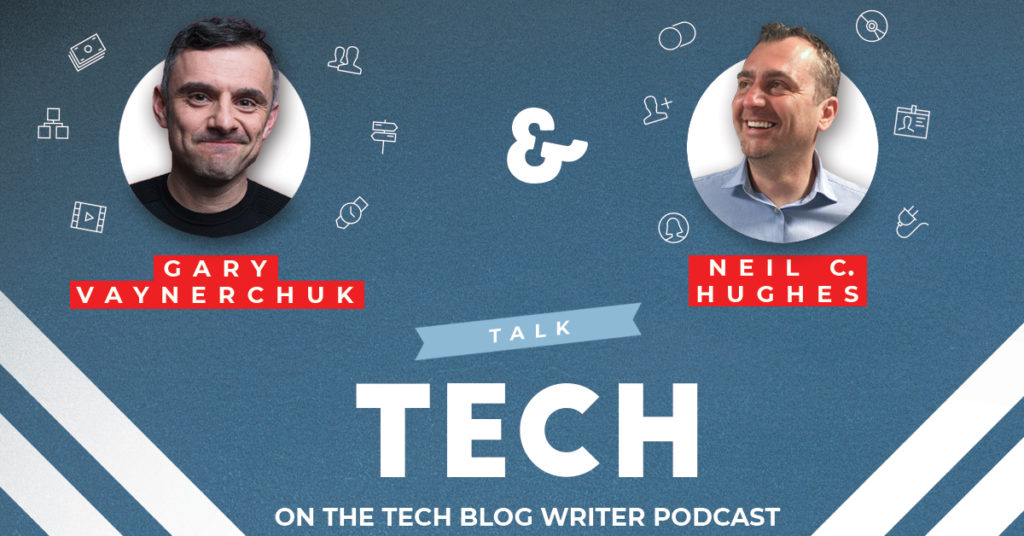 I used to leave my home at 7 am every morning and head to the office for my corporate IT role and not return home until 6:30 pm. Sound familiar? But I tried to make the most of my commute time and found myself reading, watching, and listening to content created by Gary Vaynerchuk. I was also inspired by DRocks story too and how he got his job working for Gary Vee. But rather than passively listening, I wanted to take their advice and run with it.

Fast forward five years and my journey came full circle as I got a chance to thank the guys that inspired me to follow my dream at the Magento Imagine event in Las Vegas. We tackle a wide range of topics such as digital-first giants and the rise of consolidation which is putting an end to the need for intermediaries. We also talk about how people care about privacy in theory, but then don’t live it. For the most part, people always go with convenience and the product. 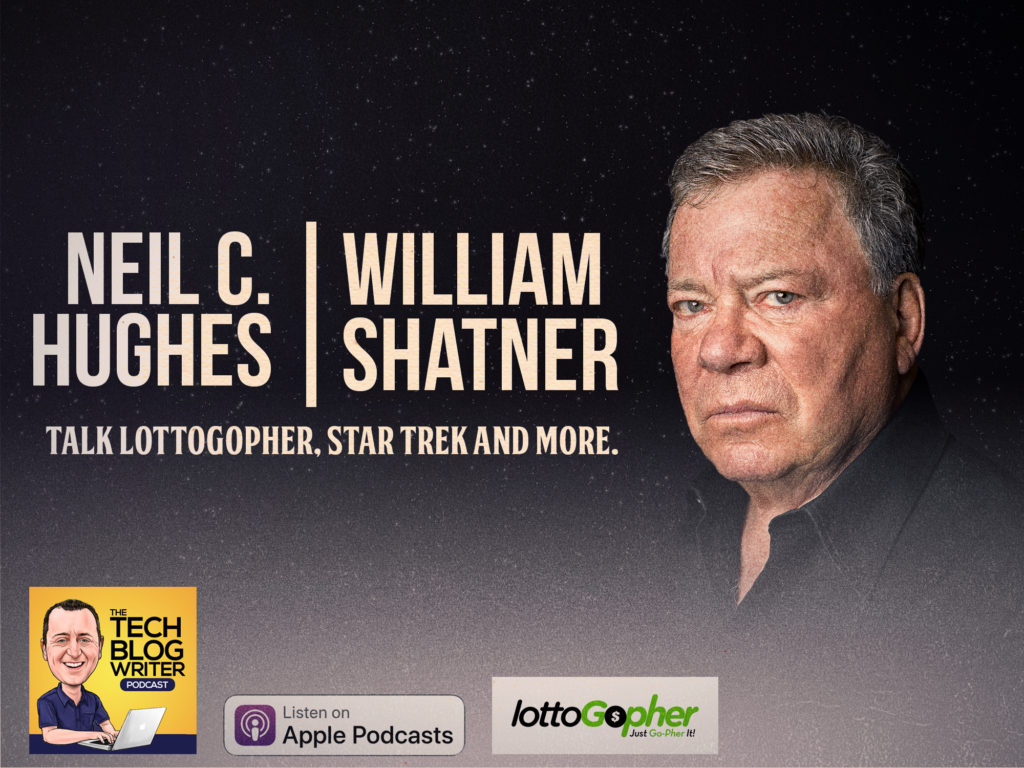 William Shatner is a Canadian and an Emmy Award-winning actor who became most famous for portraying Captain James Tiberius Kirk of the starship Enterprise. But there is much more today’s guest than his career in the Star Trek franchise.

Shatner’s 2004 cover version of Pulp’s Common People produced by Ben Folds from his underrated Has Been album is still one of my all-time favorite cover versions and many are unaware that he is also a New York Times Bestselling author. But despite an iconic career, it’s his involvement the world of tech startups that is possibly the biggest surprise.

Back In 1997, Shatner teamed up with travel discount site, Priceline.com. Priceline’s Nasdaq listed stock (NASDAQ: PCLN) has traveled from approximately $16.00 for the initial public offering, to $1840 more recently where it rests with a US$90 billion dollar market cap. Maybe we shouldn’t be too surprised to hear that William Shatner is now back on the startup scene with LottoGopher. 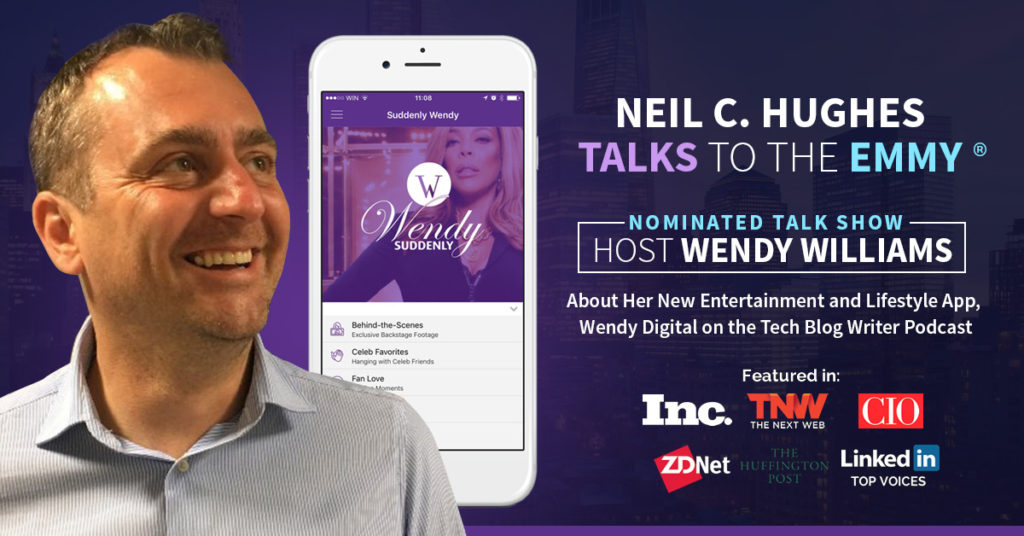 We are living in an age of instant gratification where even businesses are guilty of concentrating on the sprint rather than the marathon. We also convince ourselves that successful people are lucky or born with exceptional talent. But dismissing someone’s work ethic as luck is quite possibly the biggest insult there is. The truth that nobody wants to hear is that the only path to greatness requires hard work and dedication. The countless hours that it takes to master a skill and the sacrifices along the way that it takes to make it possible. Or as my teenage son tell me, it’s all about the grind.

However, the story of how individuals are investing 10,000 hours to master a skill rather than binge-watching TV shows on Netflix is one that is seldom told. For example, Wendy Williams is best known for her long-running daytime Emmy-nominated talk show, “The Wendy Williams Show.”

However, there is no such thing as an overnight success. When running on the comparison treadmill, many choose to conveniently forget about how Williams built a fan base throughout a 23-year career in radio. Rather than comparing herself to others in the industry, she decided to use her unique and authentic voice to build her brand. An audience of over 12 million people allowed her to become one of the most popular personalities in radio.

Wendy was inducted into the National Radio Hall of Fame in November of 2009 and became one of only a handful of women to achieve the honor. The nurturing of relationships with an audience builds a trust that should never be taken for granted. My conversation with Wendy in 2017 remains one of my favorites. 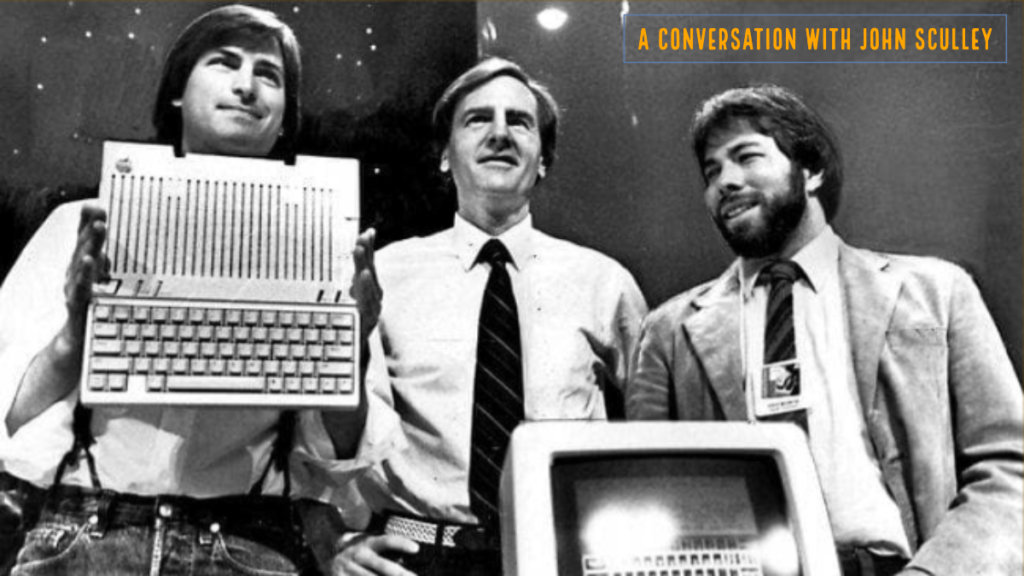 I speak with the legendary John Sculley about his inspirational career and his time at Apple with Steve Jobs. John Sculley’s journey began when he joined the Pepsi-Cola Company as a trainee in 1967. Within three years he would become the vice president of marketing and launch the famous “Pepsi Challenge” campaign where customers of all ages were challenged to choose between Pepsi and Coke.

By 1977, Sculley was unveiled as Pepsi’s youngest CEO and president to date. However, many will have also heard about the legendary tale where Steve Jobs walked up to the Pepsi CEO and delivered the line, “Do you want to sell sugar water for the rest of your life, or do you want to come work with me and changed the world?” The rest, as they say, is history.

After taking over as chief of Apple Computers Inc. in 1983, Sculley famously clashed with Steve Jobs but it was also a highly profitable period during his ten years in charge. In a recent interview with John Sculley I wanted to explore what has inspired him on his journey, the lessons he has learned and if he approved of having Jeff Daniels play him in a movie.

“When I got hired by Pepsi as their first MBA, they didn’t know what to do with me. So they put me out on a Pepsi truck and said let him learn the ropes. I was sent out to Pittsburgh, and I worked in the bottling plant before transferred out to Phoenix, Arizona to get a different experience. I would get up at 4:00 in the morning because it’s so hot in Phoenix in the summertime. I would put Pepsi signs up on tin roofs in the daytime. The temperature can get up to 125 degrees Fahrenheit, and I was doing all kinds of different things of resetting shelves in the middle of the night time and, you know, learning the ropes.

Well, it turned out that was the best thing that ever could’ve happened in my life because while I was doing that, I was observing learning and years later when I got a chance to actually get in charge of marketing, many of the innovations, like the creation of the first 2 liter plastic bottle and the creation of the Pepsi Challenge Campaign.

You know, many of these things were inspired by things I observed when I started out as a trainee. So my advice is always to be curious, reach out and take risks. Don’t worry about it if it doesn’t seem obvious straight away because you will learn from every experience if you take it all in. I always found ways to draw on my experiences later on.”

We also discuss the importance of finding a “noble cause” while also and revealing an insightful anecdote about Steve Wozniak, Bill Gates and Steve Jobs. 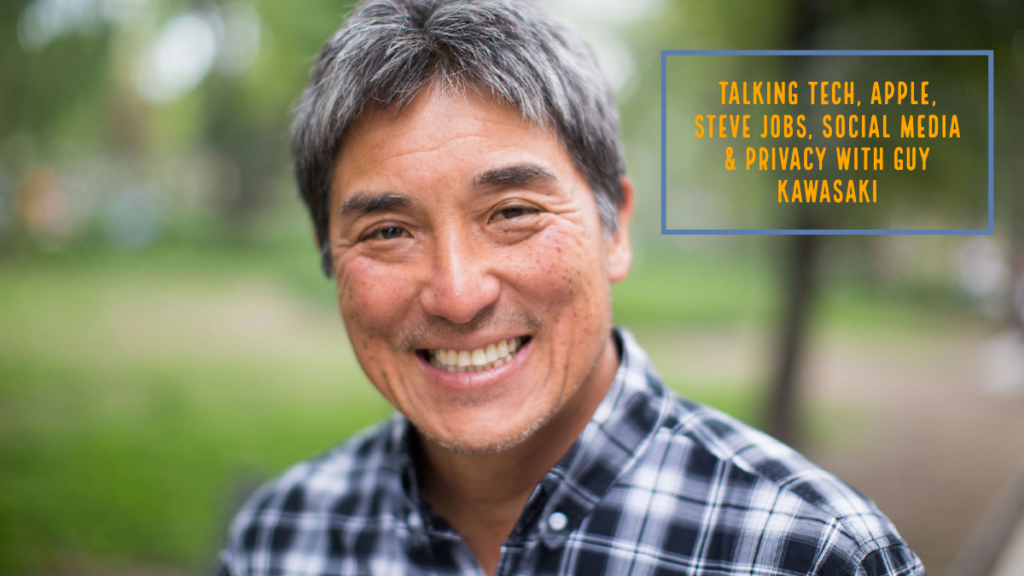 Guy Kawasaki possesses extensive knowledge of innovation, entrepreneurship, social media, and marketing. First and foremost, he is an evangelist. The term comes from a Greek word that means “bringing the good news.” That’s what he does–whether it was the good news of Macintosh or currently the good news of Canva, an online graphics-design firm. He aligns with companies and causes that empower people, foster democracy, and make the world a meritocracy.

During our conversation, Kawasaki also spoke about how Jobs was ahead of his time.“Steve truly was egalitarian in the sense that he did not care about what race, color, creed, sexual orientation, or religion you were. All he cared about was whether you were competent enough or not.”

Kawasaki also spoke of how he believes that Steve Jobs taught us that you have to get your product to market. You can’t wait for this perfect product at the perfect time. “The Macintosh 128k back in 1984 was hardly perfect, but it was good enough to ship and once you ship you learn a whole lot more than sitting around in the echo chamber.”

Anyone who has endured a presentation about creativity and innovation will tell you that Henry Ford’s most famous adage of “If I had asked people what they wanted, they would have said faster horses” is trotted out at some point. But maybe both Henry Ford and Steve Jobs had a valid point in highlighting that customers don’t know what they want. 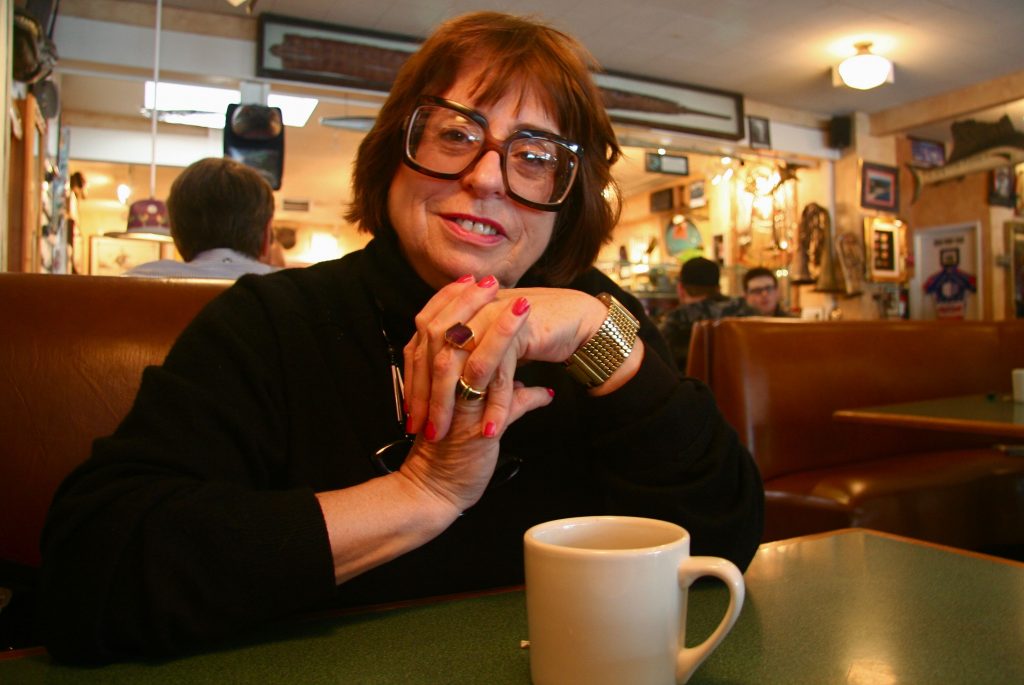 Marylene Delbourg-Delphis was one of the first European women to settle in Silicon Valley. She has affectionately been called the Duchess of Silicon Valley and is known as a tech pioneer, writer, translator and serial entrepreneur with over 25 years of experience. Marylene started her entrepreneurial career in France as the founder of ACI (now 4th Dimension), which published the first relational database for Macintosh in 1985. In 1987, she became one of the first European women to found (with Guy Kawasaki) a technology company in Silicon Valley, where she has resided ever since.

Former guest Guy Kawasaki said “Companies need cross-disciplinary advisors who can read the tea leaves. Marylene is indisputably one of these rare birds.” Kawasaki also said, “A serial technology entrepreneur for thirty years, she is insightful and strategic at the highest levels. Her passion accelerates success; her open-mindedness bridges the past and the future and facilitates consensus among the most diverse people.”

On my daily tech podcast, Marylene Delbourg-Delphis shares her secrets for success and reveals how she wooed Guy Kawasaki away from Apple.

I am approaching 1,000 interviews with tech leaders, CEOs, founders, entrepreneurs, and celebrities from multiple industries. One day, I am hoping to put many of the lessons I have learned from these conversations into a book. But until that day, feel free to browse my extensive back catalogue of interviews by clicking here.